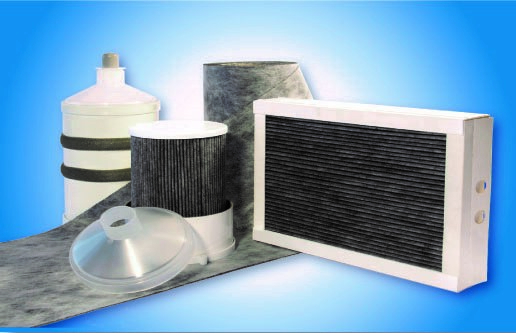 The recent development of the Plekx FA emphasizes Graver Technologies dedication to developing and applying state-of-the-art chemical treatments to activated carbons producing the highest capacity adsorbant composite structures in the industry.  Plekx FA, as with all Plekx media, is a highly uniform immobilized layer of activated carbons producing superior adsorbent products and deliver the maximum amount of adsorbent material rather than a large amount of binder and fiber.

For the maintenance of human health and comfort, the purification of indoor air is often required with the air contaminates of concern being toxic volatile organic compounds (VOC’s) as-well-as inorganic compounds.  These are emitted indoors as vapors from construction materials and consumer products. Formaldehyde is an example of such a compound.

Other contaminates of concern are typically chemically reactive oxidizing gases which are present in outdoor air and brought indoors by negative air pressure (open doors) or though ventilation systems. Examples of these are sulfur dioxide (SO2), nitrogen dioxide (NO2) and formaldehyde (HCHO), the major offgassing/acidic chemical components of diesel exhaust.

Chemisorption is a type of adsorption that occurs when molecules of a volatile pollutant chemically react with the adsorbent’s surface to form non-volatile products. This mechanism often allows the capturing of even low boiling point compounds, such as formaldehyde. As a result, filtration capabilities of Plekx are significantly enhanced by impregnating them with an appropriate chemical reagent. The price paid for the gain in efficiency is the reagent’s selectivity.